I admit I didn’t expect to do another blog post this month, but four days ago a bug was killed. A good one. A kernel info leak present on all Apple platforms, reachable from almost any context. At least a dozen people found this independently, and probably one or two dozen more knew about it second-hand. I have it on good authority that this tweet was related to it: 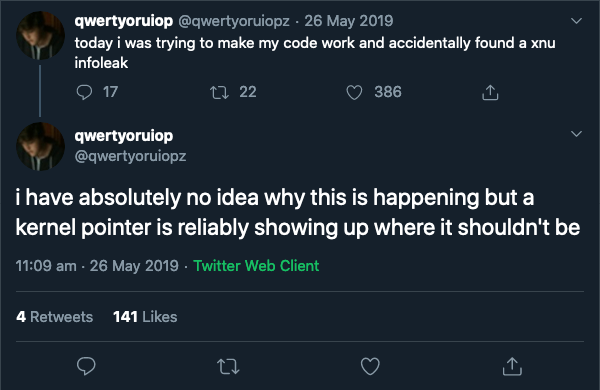 The same had happened to me about half a year earlier, and I imagine this is how it went for most folks who found it. And I have reason to believe that the final person to do so now was Brandon Azad of Google Project Zero, who of course reported it to Apple after allegedly ranting for a solid 5 minutes about how something like that could possibly exist. :P

From its nature of showing up where you wouldn’t expect it, I dubbed the bug “cuck00”.
With that, let’s jump in!

IOKit drivers frequently use callback mechanisms, and those are usually built around mach ports. And while there is no real “standard” way in which they do that, there is a facility offered by IOUserClient that at least a solid number of drivers use: OSAsyncReference64. The type declaration for that is basically:

Where io_user_reference_t is just a uint64_t, but signals that the value comes from userland.
Drivers that want to use this facility can either create the above struct manually or call IOUserClient::setAsyncReference64 - the implementation of that isn’t even really relevant, the only relevant thing is how the message that is sent back to userland is constructed, which is done by IOUserClient::_sendAsyncResult64 (source):

The critical bits are these two lines:

If you don’t see it, maybe take a minute here before reading on. It should be rather obvious.

So… I don’t know who came up with that.

This function takes an OSAsyncReference64 and sends that, among other things, to userland in a mach message. Except it expects the first element of that OSAsyncReference64 to be a mach_port_t, i.e. the mach port to send it to. And in the kernel, a mach_port_t is a raw pointer! So the only way to use this function is to pass it a struct containing a kernel pointer that it will then send to userland! Every successful invocation of this function does it! There is no way around it!

And to add insult to injury, this bug isn’t new either. It is present in xnu-123.5, the very first version of XNU ever released on opensource.apple.com, with a copyright notice dating back to the year 2000.
Twenty! Years! For a bug, that’s not even old, that is god damn ancient! It’s literally older than some of the people who are hacking iOS today! Just take a moment to appreciate that!

Now, with that rant out of the way, let’s go on.

Literally all you have to do is invoke that function. You can pick any IOKit driver you have access to. I chose IOSurface because that’s available in the contexts most people care about (3rd party app container and WebContent), and exists both on iOS and macOS.

After the usual IOSurface setup (creation of the userclient and surface), all you have to do is:

At that point you’ve exhausted the power of this bug and need some sort of memory corruption, so we can look at the different possibilities here.

The pointer you get is the address of a mach port, and the nature of the bug requires it to be the pointer to the very port that you received the message on.
So if you had a bug where you need a mach port pointer for anything, you could either use that as-is to maybe trigger a free too many and get a UaF, or by freeing it and reallocating the memory with a different, more privileged port (e.g. a task port).
For any other kind of bug that you need a valid kernel pointer for, you could simply deallocate the entire page the port is on, get it out of the zone and reallocate it with arbitrary contents.

But we can take this even further. Rumour has it that Apple’s next generation of iDevices is gonna have memory tagging. And given this history, it would make a lot of sense:

For the uninitiated, MTE (“memory tagging extension”) is a new mitigation outlined by the ARMv8.5 specification. The basic concept is to have a few bits of tagging information embedded into the top bytes of data pointers, to have the hardware validate that tag against an off-site storage on access, and to change said tag whenever the memory is allocated/freed.
As far as mitigations go, it’s probably one of the strongest concepts put forward in recent years, and would in theory kill a lot of memory corruption bugs, especially use-after-frees. And while the actual implementation will likely end up being flawed if history has taught us anything, we can try and get an edge by seeing if we can break the theory behind it already.

And this bug is pretty great in that, on an ARMv8.5 system, it would’ve given you not just the address of a mach port, but also the tag that goes with it. No mitigation in the world could’ve prevented a voluntary copyout to userland. As far as info leaks go, that’s as good as it gets!
Of course you’d still need a separate bug that survives MTE and makes use of a tagged pointer but hey, if there’s a voluntary copyout of a kernel pointer, it’s at least conceivable to imagine a voluntary copyin of one, and such a bug would precisely require what this bug gives us.
You’d be pretty constrained by the fact that you couldn’t reallocate the mach port without invalidating your dat, but you could probably still make something work with the couple of fields that you can modify from userland.

So literally all they did was change the bcopy to exclude the first element/8 bytes of reference.
And with that the bug is gone, crumbled to dust.

For twenty years there’ve been kernel pointers all over userland.
And that breaks mitigations that aren’t even out yet.
You just can’t make that up.

I salute everyone who I know found this bug independently, especially those who are younger than the bug itself. ;P
This was a good bug, may we find many more like it! :D

Again, a fully functional exploit is available on GitHub.

Feel free to hit me up on Twitter or via mail (*@*.net where * = siguza) if you have feedback, questions, or just want to chat.